Looks like an excellent programme, huge Palestinian cultural event over 2 days in London, speakers and workshops. At least one of our members will be going so we hope for a report ….

WordPress.com is excited to announce our newest offering: a course just for beginning bloggers where you’ll learn everything you need to know about blogging from the most trusted experts in the industry. We have helped millions of blogs get up and running, we know what works, and we want you to to know everything we know. This course provides all the fundamental skills and inspiration you need to get your blog started, an interactive community forum, and content updated annually. 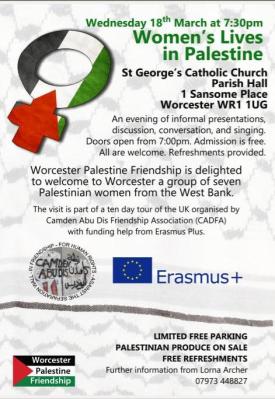 Lunch is available between 1pm and 2pm at a cost of £5.

And for anyone in London …. ON NOW till March 14 At Royal Court Theatre,  a new play by Palestinian writer Dalia Taha http://www.royalcourttheatre.com/whats-on/fireworks

The situation in Gaza is desperate because of the winter weather and the damaged infrastructure. Details here.

The European Parliament has been playing an increasingly important role in supporting  Palestinians living  in the West Bank and Gaza.  It has also been highly critical in the past of Israel’s over-reaction to Hamas and its wanton destruction of the civilian infrastructure in Gaza.

So we were surprised to see that the newly elected Green  MEP for the South West, Dr. Molly Scott Cato, had voted against an EU resolution  in September condemning the latest attacks on Gaza in operation Protective Edge. We  wrote to ask her why.

We have now received a very full reply on Molly’s behalf setting out both her own views and those of the  group of UK Green MEPs. It explains  that the decision to vote against the September resolution was because it didn’t go far enough.  For example,  Molly is also calling for  a comprehensive arms embargo throughout the region, the immediate lifting of the Gaza blockade and termination of Tony Blair’s role as ‘Peace Envoy’ for the Middle East.

Coincidentally, we have also been sent a copy of a reply from another South West MEP,  the Conservative Ashley Fox,  responding  to a request that he support the calls  being made for a suspension of the EU-Israel Association Agreement.  This strikes a very different note,

starting with  “Hamas is a terrorist organisation.  lt deliberately provoked an Israeli military response whilst sheltering behind the people that it professes to protect in the knowledge that many of them would be killed in the violence.”   Mr. Fox did, however, vote in favour of the September resolution as did our other Conservative MEP,  Julie Girling .

You can read both responses here and draw your on conclusions.  MollyScottCato081214  AshleyFoxMEP

We are still trying to elicit the views of UKIP given that they also have  two MEPs representing  the South West.  Previous requests to the self-styled ‘Earl of Independence’  – a.k.a. William the Earl of Dartmouth – went unanswered but  we will try again.   And we will  write to Claire Moody,  the Region’s  one  Labour MEP .   Also newly elected in 2014, she too voted in support of the September resolution.

Want to tell Martin Horwood how much you support his recent stance on  Israel/Palestine … or berate him for not doing enough?   Whatever your views,  now is your chance.   Martin has agreed to meet the Group at our next meeting – on 11th December at the Friends Meeting House, Cheltenham, starting at7:30 pm.   So  please come along and show him just how much interest there is in this issue here in Cheltenham.

This is the first of the meetings we intend  to arrange with candidates in next May’s general election; others to follow in the new year.

Click on this link for a note of the issues we hope to discuss.  Horwood 111214

FAMILIES UNDER THE RUBBLE: ISRAELI ATTACKS ON INHABITED HOMES

Films and talks, until 16th December

There are talks this weekend by Ann Davison about her work with the Ecumenical Accompaniment Programme (EAPPI) in Israel and Palestine. (Organised by Gloucestershire Quakers)

Meetings quarterly, time and place to be announced.